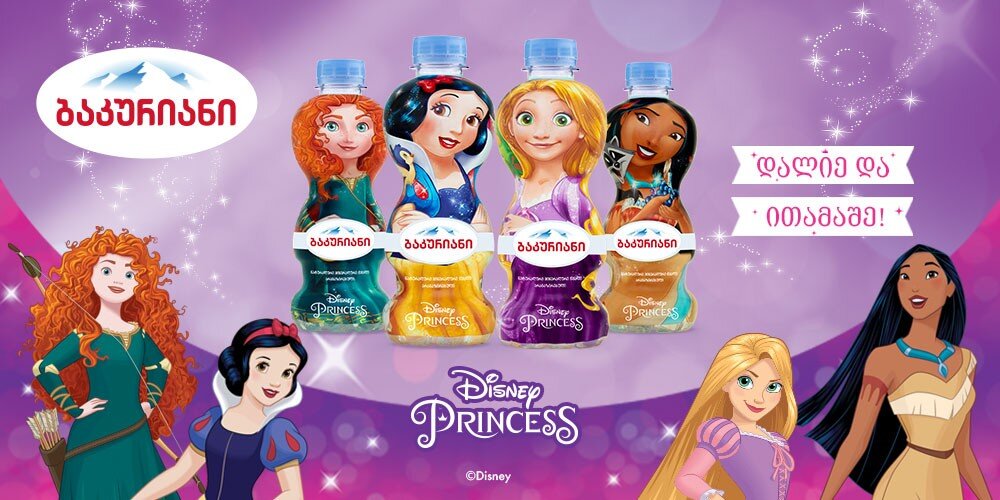 A cooperation agreement between the companies was signed in 2018, after which IDS Borjomi Georgia received a license to use the Disney characters. In the first phase, Disney characters Frozen and Marvel’s Avengers appeared on “Bakuriani” packaging in 2019. The toy bottle series was expanded with the famous Disney princesses Cinderella, Ariel, Bella, Jasmine and Mulan. This year, the beautiful Snow White, the long-haired Rapunzel, Princess Pocahontas and Sophia joined the list of favorite characters.

“We continue to develop the children’s water segment, which is one of the important areas for us. Our main goal is to form a good habit of drinking water in Bakuriani users from childhood, to promote a healthy lifestyle. Therefore, we combine the useful with the pleasant and try to entertain the kids with new products often. This time the second series of princesses appeared on the toy bottles. Bottles “Bakuriani”, decorated with everyone’s favorite characters, are already on sale. “Drink and play” is still the main message of our communication. We are very proud that children develop such a healthy habit to drink water while playing,” – says Salome Bezhitashvili, brand manager of “Bakuriani”.

“Bakuriani” toy bottles in special packaging of 0.33l are produced at Borjomi Bottling Plant N2. It should be noted, that “Bakuriani” is a natural mineral water, saturated with optimal quantity of mineral complexes. Due to its unique composition, it is best suited for people who like active lifestyle. “Bakuriani” restores the water balance in the body and is recommended for use in children’s food.

Drink, play and travel to the magical world of Disney!