IDS Borjomi Georgia and Walt Disney collaboration will be marked with the new Bakuriani Toy Bottles what will soon appear on the shelves. 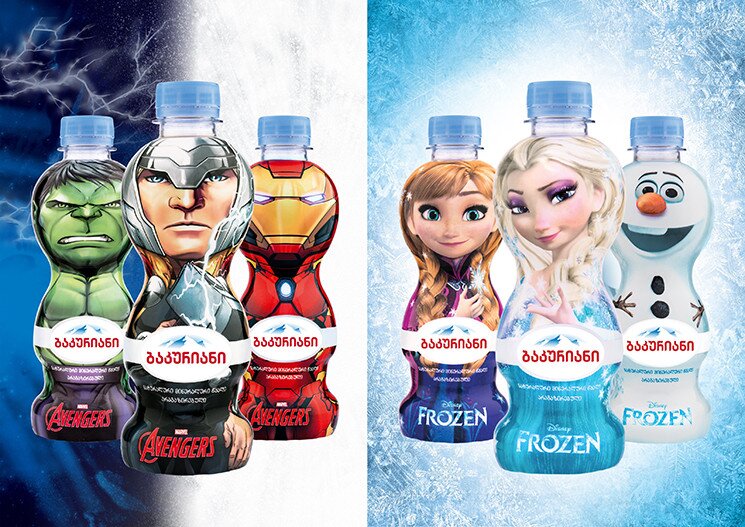 From now on, children’s favorite heroes – Elsa, Anna and Olaf from Frozen and Hulk, Iron Man, Captain America and Thor from the Avengers will become an integral part of their beloved water - Bakuriani.

“The children’s market isn’t new to us, following the positive response and growing demand after releasing Bakuriani Tsida, it became evident that there was a rather high and growing demand for this segment. Bakuriani is the healthiest water, popular and essential for children. And since the whole generations have been growing up watching Disney movies, we decided to couple healthy with enjoyable and offer this exciting product to our customers. Drink and Play is the main message,” states Davit Gelashvili, Director of Marketing Communications Department at IDS Borjomi Georgia.

Bakuriani Toy Bottles are produced in a special 0.33 liter packaging by N2 Borjomi manufacturing factory. Bakuriani is a natural mineral water filled with an optimal range of mineral components. Thanks to its unique composition, it is ideal for those who favor active lifestyle. It restores water balance in body and is recommended for nutrition by the Sanitation, Hygiene and Medical Ecology Scientific-Research Institute named after G. Natadze.

IDS Borjomi Georgia, the company that produces Bakuriani is part of IDS Borjomi International.  With its production rate as well as with its technological innovations, the company is an unmatched market leader within Georgia’s mineral water industry. It’s portfolio boasts established brands such as Borjomi, Likani and Bakuriani.